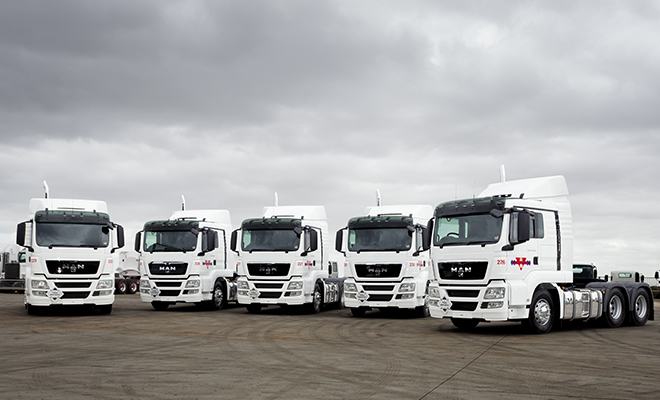 Arriving in Australia in the 1850's, Martin Rocke was first employed as a purser on a vessel which traded between Melbourne and Portland.

After gold was discovered in Victoria, he saw an opportunity to strike out in business for himself by buying a horse and dray to cart supplies to the miners and shopkeepers at Bendigo in 1857.

As the availability of easily-won gold lessened, so did the demand for his cartage services and he then began to move goods to and from the Melbourne waterfront and the commercial enterprises adjoining the Port.

The business prospered. Horse stables and a boarding house for the drivers were established in Flemington Road, North Melbourne, and it was here that son, Edward Albert Rocke, was introduced to the world of transport and the company become known as E.A. Rocke Carrier.

World War I saw Edward's son, Gerald Rocke, serve in France as an ambulance bearer and on his return to Australia Gerald joined the business which was struggling to survive in a depressed national and international environment.

The first truck was a second hand Leyland purchased from the Shell Company for the equivalent sum of $180, despite the Bank Manager's advice that the company should stick to horses.

The business survived the Great Depression of the 1930's with the North Melbourne premises sold and the fleet reduced to a small number of double horse teams and a motley collection of motorised vehicles.

World War II benefited the business, as it was awarded Government contracts which continued on well after peace was declared—but in reality the company was one of many competing in a very small market.

In 1955, Gerald's son, Peter Rocke, entered the business as a truck driver in a fleet of 8 (eight) second hand tray trucks and one (1) horse drawn lorry.

Peter Rocke stayed on to manage the Company when it was sold in 1964 to F.H. Stephens Limited, and subsequently taken over by Mayne Nickless Limited in 1971. Nevertheless, E.A. Rocke retained its identity as a separate activity of the corporation, pursuing its main business as a Melbourne waterfront carrier.

Containerisation was a boon to the fortunes of E.A. Rocke. Strategically located in the port of Melbourne, and with the support of Mayne Nickless Limited, it expanded into Sydney and Brisbane and, under the control of Peter Rocke, became the largest waterfront carrier on the eastern seaboard of Australia in the 1980's and early 1990's.

In 1995, the Rocke family purchased Coulson Transport Pty. Ltd. And in the ensuing years, Peter's sons, Michael, Matthew and Paul Rocke, developed the business into a dominant Melbourne waterfront carrier, before selling to Mayne Nickless Limited in 1999.

Rocke Brothers Pty. Ltd. began operating in 2003 in Justin Road, Brooklyn, before moving to the present location at Alick Road, Brooklyn, in 2004. The Company continues to specialise in waterfront transport and associated services and, with Michael, Matthew and Paul Rocke, maintain an unbroken line of five (5) generations of the family in road transport.